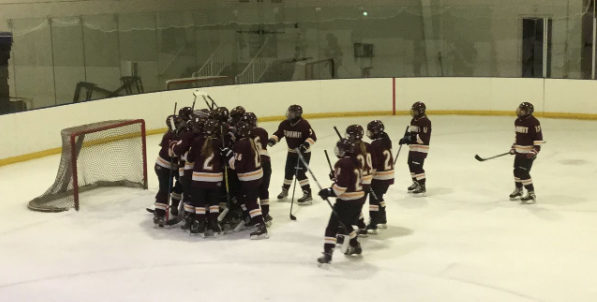 Despite controlling the game for the first 40 minutes, sixth-seeded Summit needed to dig deep in the last five.

In 42 seconds, a four-goal lead shrank to two with 2:30 to play in regulation.

With third-seeded Pingry pressing, Lily Spinner made a point-blank save on a shot from the slot to calm the nerves.

Summit held on from there for a 4-2 win in the quarterfinal round of the State Invitational Tournament at Bridgewater Sports Arena in Bridgewater.

Spinner’s had good fortune against Pingry, having just recorded her first career shutout against this same team in a 5-0 victory seven days ago.

Her workload through two periods consisted of four shots, but things turned up in third and she was there to answer the bell with 10 saves.

“When you’re not seeing a lot of shots it’s sometimes hard to stay alert and active but she’s such a mentally-focused kid that she’s always ready,” said Summit coach Matt Stanbro.

Summit outshot a Pingry team that was without leading scorer Allie Moss 7-2 in the opening period and jumped out to a 1-0 lead on Caroline Sharpe’s 32nd goal of the season off a beautiful rush up the ice from Leah Rubinshteyn.

Rubinshteyn put away her 18th of the season, and seventh in her last five games, 27 seconds into the second on a rebound off a shot from Sharpe to make it 2-0.

Taylor Cornell added insurance markers later in the frame to make it 4-0. The sophomore has also been hot with four goals in her last three games.

“We are all so bonded together,” she said. “We all are there for each other from the forecheck to the back check we all work our hardest on all aspects of the ice and I think that’s really important.”

The offensive depth on display has been a big reason why Summit has won five of its last six, scoring 45 goals in the process.

“At different parts of the year, we were experiencing with different people at forward and defense,” Stanbro explained. “We found recently that we have a good balance. We like where our D is at and it’s nice to be able to have two back-to-back lines to go each and every shift and keep fresh legs on the ice.”

Summit will face either seventh-seeded Chatham or second-seeded Trinity Hall in the semifinals tentatively scheduled for Monday with a trip to Prudential Center in the first-ever state final on the line.

“It’s exciting,” Cornell said. “It’s a first experience together as a team where we can really come together and play together. It’s really fun.”