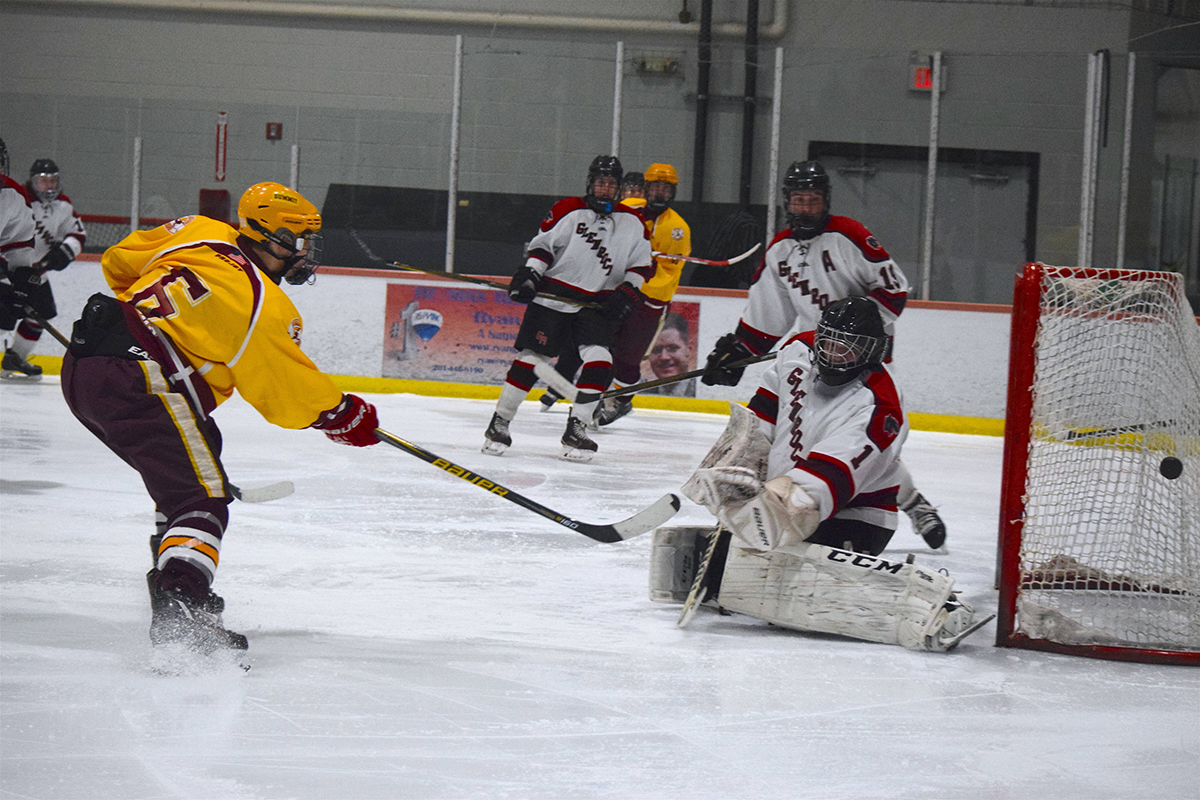 Over the course of the past month, the Summit High School Boys Varsity Ice Hockey Team has come up big.

The Maroon & White has consistently found a way to score a big goal at the right time and get big-time goaltending from Wilson Lees. The also were solid front-runners, usually scoring first and earning a wire-to-wire victory.

The alchemy had served them handsomely — Summit had won six out of seven over that timespan including the Union County and McInnis Cup Finals.

So, facing number-one seed Glen Rock in the NJSIAA Public B ice hockey state tournament quarterfinals, the eighth-seeded Hilltoppers knew they would have to deliver another big performance in order to pull off the significant upset.

Part two of the effective equation — junior netminder Lees stoning the opposition — was ‘all systems go’ for the first 28-plus minutes of action. The big goal? Unfortunately for Summit — despite a few golden chances — it never came.

The Panthers scored first and the Hilltoppers, who spent the high-majority of the night defending their zone and / or trying to exit it, hit the proverbial wall in the third period. Summit surrendered two more goals in the final 15 minutes and were eliminated from the NJSIAA Tournament by Glen Rock 3-1 at the Ice House in Hackensack.

Will Vitton got a consolation goal with just 18 ticks left on the clock — 1:28 after the Hilltoppers, who were outshot 32-15 in the game, had brought Lees to the bench for an extra attacker — and Lees stopped 29 shots in a valiant effort that ended in defeat.

Summit more than held their own in a scoreless first period, with Vitton having perhaps the best chance to score, but he was unable to tip an Owen McLaughlin cross-ice pass past Panthers goalie Ryan McAuley. Summit took the only penalty which they killed with relative ease, and shots were 11-4 in favor of Glen Rock, but most were pedestrian saves for Lees.

The second period was a different story. Lees was forced to make a huge stop in the first minute, and the ice was tilting in favor of the fast home team, which was winning most of the ‘second pucks’ and hemming the Hilltoppers into their own end.

Still, Summit had two massive chances and, in the ‘woulda-coulda’ world that sports spawns, potting either one may have meant an entirely different storyline.

Tom Pryymak, with a good chunk of the goal to shoot at, hit the side of the net on a point blank effort and Vitton, in alone on a partial breakaway, saw the puck drift off the toe of his stick.

The first goal of the game, especially for Summit, was beyond important, but Glen Rock was first on the scoreboard, adding insult to injury with the tally coming via the shorthanded route.

With the Hilltoppers on the power play, the puck squirted up the center of the slot, splitting Summit’s defense, and was picked up by Glen Rock senior Jake Kinney who skated in alone on Lees and deposited the puck low right on his backhand.

It was a hammer blow to the Hilltoppers, coming with just 1:20 left in the second period and, while it did not end up being the game-winning goal, it put the Panthers in the driver’s seat to win the game.

A Summit push was needed in the third, but it was Glen Rock that had the energy, with the Hilltoppers’ necessity to defend for long stretches of the first two periods seemingly putting their collective needle on ‘E’.

The Panthers pressed the play and made it 2-0 on the power play when Matthew Maselli poked the puck past Lees from outside the crease at the 10:19 mark after a scrum in front.

It was 3-0 less than two minutes later when a 2-on-2 rush, at its conclusion, became a 3-on-2 advantage. Trailing the play, Glen Rock’s Peter Cassidy’s wrist shot from the slot beat Lees with 8:23 remaining.

The rest of the contest played out routinely. Summit’s hearts were far more than willing but their legs, with Vitton’s late goal helping the optics a bit but not easing the disappointment.