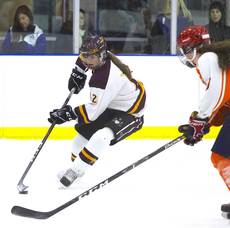 ROSELLE, NJ – The Summit High School Girls Ice Hockey Team found themselves in a five-goal ditch against Trinity Hall at the Warinanco Skating Center, then scored three straight goals to get right back into things before surrendering a third-period goal with just over five minutes remaining to fall, 6-3.

Junior Caroline Sharpe had two goal and an assist, and classmate Maisie Hiltabrand also found the back of the net for the Hilltoppers, now 11-6-2 on the season. Alyssa Laurino had two goals for the Monarchs.

Sharpe’s two goals came via the unassisted route just under five-minutes apart in the second period. Hiltabrand’s tally came with 7:35 to go in the game, but the Maroon and White could get no closer.

The ‘Top is right back on the ice February 13, taking on Morristown at Warinanco. Face-off is 4:45 p.m.