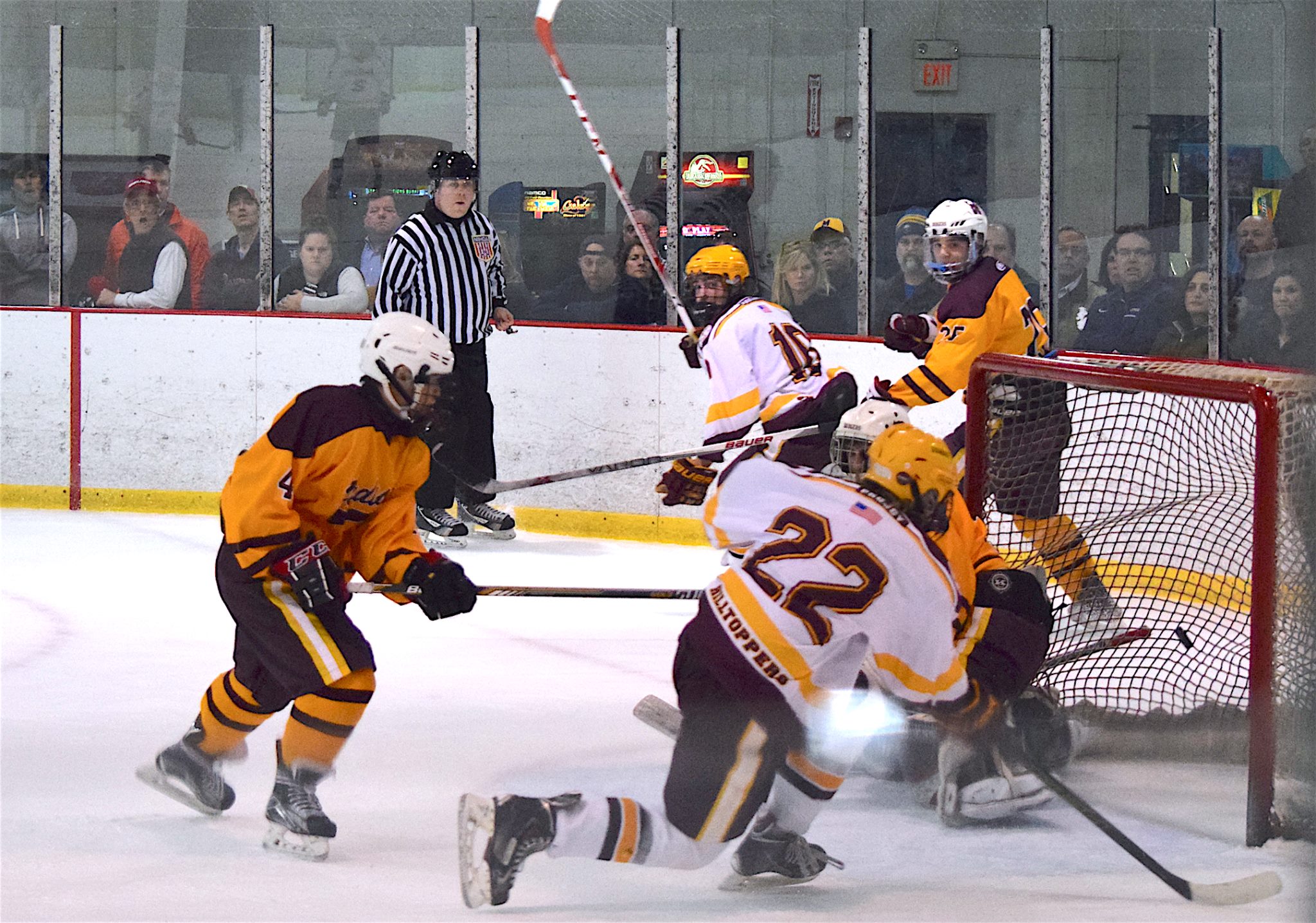 Will Vitton scored on a one-timer from the right face-off circle with just over five minutes remaining in the game, breaking a scoreless tie, then set up an insurance goal from Owen McLaughlin minutes later as the eighth-seeded Summit High School Boys Varsity Ice Hockey Team advanced to the NJSIAA Public B State Tournament quarterfinals with a 2-0 victory over ninth-seeded Madison at the Union Sports Arena.

Vitton took a cross-ice feed from freshman Tom Pryymak with 5:21 left in the third period and fired a shot that Dodgers’ sophomore netminder Matt Ubertaccio got a piece of, but not enough to keep it out the goal.

Just over a minute and a-half later, Vitton turned provider, darting behind the goal and drawing the  Madison defense and Ubertaccio’s attention before whipping a pass back door to McLaughlin who had virtually an empty net to hit. The senior captain put the biscuit in the basket and doubled The Maroon & White’s lead with 3:45 left.

From there, the only question that truly remained was whether Summit goaltender Wilson Lees would get the shutout he deserved. The junior was not severely tested often, but came up with several massive saves when the game was — and to keep the contest — scoreless.

On the afternoon, Summit enjoyed a big advantage territorially and on the shot clock, firing 37 pucks on target to Madison’s 21. Despite those advantages, and the fact the Hilltoppers hit a pipe and had another shot swept out of the crease as the puck rolled on edge literally on the goal line, Summit was locked in a 0-0 tilt and was one mistake away from being knocked out of the tournament.

Lees made two stops in particular that, while they do show up numerically on the scoresheet, carry much more significant weight relative to determining the game’s outcome. The first came off a Summit giveaway past the midway point n the second period, a low backhander from the slot turned away by Lees’ right pad.

The second was a stoning of a point-blank attempt just 40 seconds into the third period. If either shot gets past Lees the entire complexion of the game — one that, for the last 30 minutes of play at least, felt like it was always going to be a ‘first goal wins’ affair — would change.

Madison had some hop from the opening face-off of the contest but, after approximately five minutes of play, Summit began to control the neutral zone and spend considerably more time in the Dodgers’ end of the rink.

After a modest 10-6 shot advantage in the first period, the Hilltoppers began to press the initiative even more in the second period. After killing a penalty to David Sharpe — the only infraction called in the game — Summit began to direct more rubber at the target, but could not put one by the Dodgers’ goalie. The one shot that did beat Ubertaccio, a 15-foot snap shot from the left face-off circle off the stick of sophomore Charile Collins, rang off one of goaltender’s best friends, better known as the left goalpost.

After Lees’ very early third-period heroics, the Hilltoppers continued to carry the play, rolling three lines over while Madison appeared to play just two. Summit looked fresher, was applying pressure consistently, and the breakthrough finally came off the stick of Vitton, who was quickly engulfed in a sea of white jerseys after his goal.

Still, Madison had five minutes in which to score and send the game to overtime, but that drama was short-lived as Vitton drew a crowd before dishing to McLaughlin, giving the senior captain a chance he couldn’t miss, and he didn’t.

Summit had two or three solid looks at the empty net when Ubertaccio was pulled for an extra attacker and, while they didn’t score, they didn’t need to.

The Hilltoppers will next face number-one seed Glen Rock, a 3-0 winner over Jackson Memorial, February 27 at the Ice House of New Jersey. Face-off is set for 4:15 p.m.

The Ice House is located at 111 Midtown Bridge Approach in Hackensack.