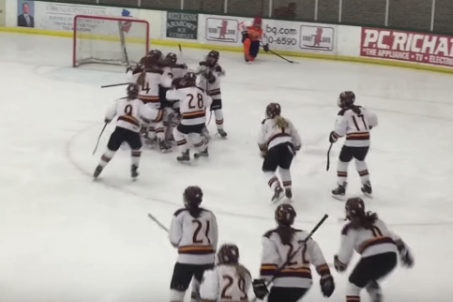 The list of firsts in the 2019-20 girls ice hockey season keeps growing.

Summit and Trinity Hall squared off at the Red Bank Armory on Monday with one ticket available for a date at Prudential Center in the first-ever girls hockey state final.

It’s only fitting that 12 goals and 45 minutes of play weren’t enough.

Both teams went back-and-forth in a 15-minute overtime period and not one puck got past Summit’s Lily Spinner and Trinity Hall’s Maddie Reynolds.

In what is believed to be the first of its kind in New Jersey high school girls hockey’s history, a shootout would now be used to determine the winner.

Leah Rubinshteyn, Caroline Sharpe and Elizabeth Puskar all scored in the five-round competition and Lily Spinner made three of four saves to seal a 7-6 victory for sixth-seeded Summit over second-seeded Trinity Hall.

“I’m really nervous but I know my team has my back no matter what,” said Spinner, who had 39 saves through regulation and overtime. “I had confidence that all the people shooting were going to score because they’re all so good. I was nervous but I was ready for it.”

Spinner played the aggressor in goal, dropping the paddle down for two successful poke checks, including the one that ended the game, though nobody really knew it at first.

“I thought it was but everyone backed up again and then I thought another shooter was coming,” she said. “Glad that was the last one.”

Though it was Spinner’s first live shootout, the experience she has playing one-on-one against teammates after practice came to good use. Even in practice, she’s never been afraid to throw out that poke check.

Offensively, Rubinshteyn and Sharpe deked their way to goals, while Puskar found twine with a quick shot.

Rubinshteyn had two goals and an assist through regulation and Sharpe had a goal and three assists. Puskar, Taylor Cornell and Maisie Hiltabrand also scored.

“I know we have a lot of top-end talent on our team and I was really excited going into the shootout,” said Summit coach Matt Stanbro. “I liked our chances heading in. I tried telling the girls to keep calm and make sure everything gets on net.”

The team will enjoy its win for the night because next up is a tilt against top-seeded Morristown-Beard at Prudential Center with the first-ever state title on the line.

Elisabeth Clements had a goal and four assists for Trinity Hall. Molly Riggi had three goals and an assist. Both were stopped in the shootout and freshman Alyse Borras was the only one to light the lamp.